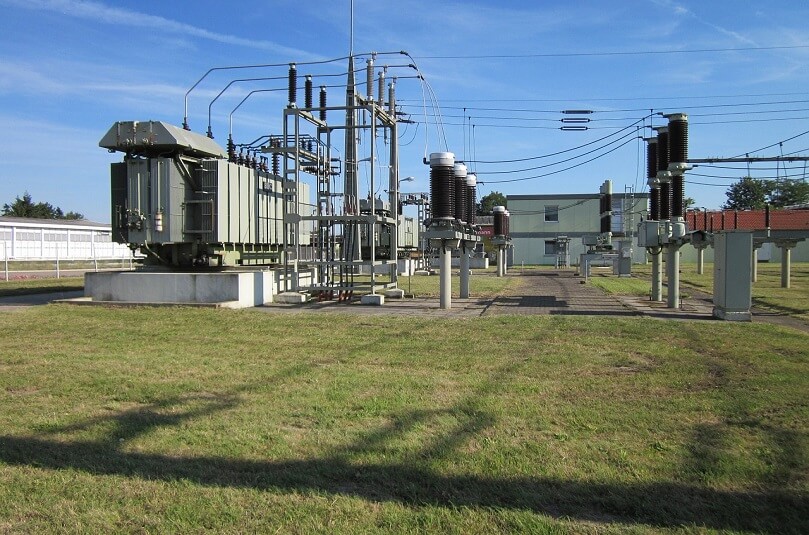 The failure of a power transformer is almost always a catastrophic event that will cause the system to fail. The two primary enemies of power transformers are transient overvoltages and heat. Power input to a transformer is not all delivered to the secondary load. Some are expended as copper losses in the primary and secondary windings. These I²R losses are practically independent of voltage; the controlling factor is current ﬂow. To keep the losses as small as possible, the coils of a power transformer are wound with wire of the largest cross-section that space will permit.

A practical transformer also will experience core-related losses, also known as iron losses. Repeated magnetizing and demagnetizing of the core (which occurs naturally in an ac waveform) results in power loss because of the repeated realignment of the magnetic domains. This factor (hysteresis loss) is proportional to frequency and ﬂux density. Silicon steel alloy is used for the magnetic circuit to minimize hysteresis loss. The changing magnetic ﬂux also induces circulating currents (eddy currents) in the core material. Eddy current loss is proportional to the square of the frequency and the square of the ﬂux density. To minimize eddy currents, the core is constructed of laminations or layers of steel that are clamped or bonded together to form a single magnetic mass.

Temperature rise inside a transformer is the result of power losses in the windings and the core. The insulation within and between the windings tends to blanket these heat sources and prevents efﬁcient dissipation of the waste energy, as illustrated in Figure. Each successive layer of windings (shown as A, B, and C in the ﬁgure) acts to prevent heat transfer from the hot core to the local environment (air).

The hot spot shown in the ﬁgure can be dangerously high even though the outside transformer case and winding are relatively cool to the touch. Temperature rise is the primary limiting factor in determining the power-handling capability of a transformer. To ensure reliable operation, a large margin of safety must be designed into a transformer. Design criteria include winding wire size, insulation material, and core size.

The nameplate kVA rating of a transformer represents the kVA that will result in the rated average winding temperature rise when the unit is operated at 100% of rated kVA under normal service conditions. When operating under these conditions, the result should be a normal life expectancy for the transformer.

A general rule of thumb says that a 30-year life can be expected for a transformer with a 220°C insulating system that has a winding hot-spot temperature allowance of 30°C. Operating such a transformer at rated kVA on a continuous basis with a 30°C, 24-hr average ambient (40°C maximum ambient) should equate to a normal useful life.

It should be recognized that the life expectancy of transformers operating at varying temperatures is not accurately known. Fluctuating load conditions and changes in ambient temperatures make it difﬁcult, if not impossible, to arrive at such deﬁnitive information. However, if a transformer is operated under normal conditions, it could easily last longer. A 40-year life span is not unusual, and some transformers have exceeded that.

Transformer failures resulting from transient overvoltages typically occur between layers of windings within a transformer. At the end of each layer, where the wire rises from one layer to the next, zero potential voltage exists. However, as the windings move toward the opposite end of the coil in a typical layer-wound device, a potential difference of up to twice the voltage across one complete layer exists. The greatest potential difference, therefore, is found at the far opposite end of the layers.

This voltage distribution applies to continuous 60 Hz signals. When the transformer is ﬁrst switched on or when a transient overvoltage is impressed upon the device, the voltage distribution from one hot layer to the next can increase dramatically, raising the possibility of arc-over. This effect is caused by the inductive nature of the transformer windings and the inherent distributed capacitance of the coil. Insulation breakdown can result from one or more of the following:

Any of these modes can result in catastrophic failure. A transformer winding can be modeled as a series of inductances and shunt capacitances. The inter-turn and turn-to-ground capacitances are shown by Cs and Cg, respectively. During normal operation, the applied voltage is distributed evenly across the full winding. However, if a steep front wave is impressed upon the device, the voltage distribution radically changes. For the voltage wave to start distributing itself along the winding, the line-to-ground capacitance (Cg) must be charged. This charging is dependent upon the transformer winding-to-ground capacitance and the impedance of the supply line.

Current ﬂow through the windings of a transformer applies stress to the coils. The individual turns in any one coil tend to be crushed together when current ﬂows through them. There also may be large repulsion forces between the primary and secondary windings. These mechanical forces are proportional to the square of the instantaneous current; they are, therefore, vibratory in nature under normal operating conditions. These forces, if not controlled, can lead to failure of the transformer through insulation breakdown. Vibration over a sufﬁcient period of time can wear the insulation off adjacent conductors and create a short circuit. To prevent this failure mode, power transformers routinely are coated or dipped into an insulating varnish to solidify the windings and the core into one element.

The advantages and disadvantages of dry-type transformers vs. liquid-ﬁlled units depend upon the application. Dry-type transformers can usually be located closer to the load, resulting in cost savings because of shorter cable runs and lower electrical losses. A liquid-ﬁlled transformer, on the other hand, may require special construction features for the room in which it will be placed because of ﬁre-safety considerations. This may dictate a location some distance from the load. In addition, periodic testing must be conducted on the ﬂuid to determine its dielectric strength, water content, dissolved gases, and other parameters.

In some applications, there is no option to the use of liquid-ﬁlled transformers; dry types are limited in size and voltage handling capability. Liquid-ﬁlled types are available in almost limitless kVA and voltage ratings. Also, if requirements call for a transformer to be located outdoors, it may be less expensive to purchase a liquid-ﬁlled unit. With oil as the liquid, the cost would be lower than for a dry-type of equivalent rating; with low-ﬁrepoint ﬂuids, the cost would probably be comparable to a dry-type.

For liquid-ﬁlled transformers, the main cooling/insulating mediums used today are mineral oil, high-molecular-weight hydrocarbon, and silicone ﬂuid. If a leak occurs in the transformer tank, ﬁre safety becomes an important issue. Because of hazards associated with tank rupture and the possible ignition of the dielectric, a thorough analysis covering ﬁre safety and the possible effects on the environment should be carried out well in advance of device installation.

Liquid-ﬁlled transformers use an insulation system of kraft or aramid paper, pressboard or aramid spacers, and a ﬂuid that serves as both an insulating and cooling medium for the transformer [9]. Paper is commonly used for insulation between layers of winding material. It typically has a diamond-patterned adhesive backing that, when cured, solidly contains the winding. Spacers serve as a form (which can be rectangular or cylindrical in shape) for the windings as well as a spacer between layers of the windings. The spacing is necessary to allow the insulating ﬂuid to ﬂow through and cool the windings and the core. Spacers are also used to insulate the windings from the core as well as to support the leads on their path to the bushings.

Any moisture that is present in the ﬁnished core and winding assembly is purged by vacuum and oven drying processes. After removal from the oven and while still hot, all connections are tightened and the entire assembly is immersed into its liquid-ﬁlled tank. This ensures that moisture will not again penetrate into the windings and also allows the insulation to absorb the maximum amount of dielectric ﬂuid.

The particular type of insulation used is rarely speciﬁed by the customer for other than large utility substation transformers or for unusual applications. More often, it is the transformer manufacturer’s or rebuilder’s choice based upon the operating conditions the transformer must meet.

Dielectric liquids of various types are used as an insulating medium as well as a means of cooling liquid-ﬁlled transformers. Common insulating liquids include the following:

• Mineral oil. A mineral oil-ﬁlled transformer is generally the smallest, lightest, and most economical transformer available. Mineral oil has excellent properties for use in transformers, but it has the inherent weakness of being ﬂammable. Its use, therefore, is restricted to outdoor installations or when the transformer is installed within a vault if used indoors.

• High-molecular-weight hydrocarbon (HMWH). HMWH is another high-ﬁrepoint dielectric that is widely used as a transformer liquid. It has similar values for dielectric strength and dielectric constant, power factor, and thermal conductivity as mineral oil.

Fire properties of dielectric ﬂuids are typically classiﬁed by the following characteristics:

• Flash point: The temperature at which vapors from a liquid surface will ignite in the presence of a ﬂame.

• Fire point: The temperature at the surface of a liquid that will sustain a ﬁre.

• Ease of ignition: How readily the liquid will generate and maintain a ﬂammable fuel/vapor mixture at the surface.

• Heat release rate: The product of vaporization rate and the heat of combustion of the ﬂuid. The higher this rate in a large-scale ﬁre, the higher the degree of ﬁre hazard.

In cooling a liquid-ﬁlled transformer, the insulating ﬂuid ﬂows in the transformer through ducts and around the coil ends within a tank that contains the core and coils [9]. Removal of the heat from the ﬂuid takes place in external tubes. These radiators consist of headers extending from the bottom and top of the transformer tank and rows of tubes connected between the two headers. When operating within its self-cooled (OA) rating, natural convection caused by temperature differences within the tank carries the oil up through the windings, down through the cooling tubes, and back into the tank. The transformer ﬂuid, acting as a heat-transfer medium, picks up the heat from the core and coils and dissipates it to the air via the tubes.

Auxiliary cooling fans can be provided if the transformer is to be operated above its self-cooled ratings. This is advisable when the transformer is to operate under occasional heavy overloads or high ambient temperatures or to accommodate new loads beyond its rating. Liquid-ﬁlled transformers, because of their double heat-transfer requirement (core/coil-to-liquid and liquid-to-air), have a lower forced air (FA) rating than dry-types. In liquid-ﬁlled types, the forced air rating of transformers up to 2500 kVA is raised to 115% of its self-cooled kVA rating, and those of larger units to 125% of their self-cooled VA rating.